The square with side a = 1 is inscribed and circumscribed by circles. Find the annular area. 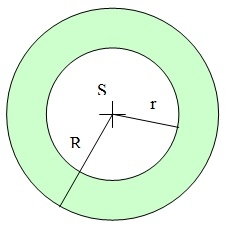