There are eighty more girls in the class than boys. Boys are 40 percent and girls are 60 percent. How many are boys and how many girls? 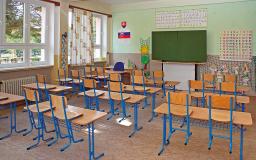