6 kg of potatoes is enough for four at home for 15 days. For how many days will this amount be enough if a grandma will visit? 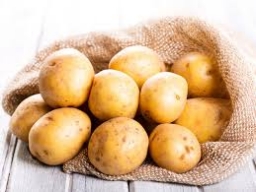