Calculate the value of interest in period of 1 year from the deposit 62000 CZK at 8 percent interest rate, after deducting 15 percent tax. 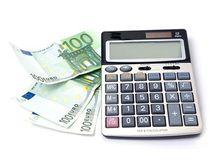