When at the supermarket are opened only 2 cash people waiting in the front approximately 12 minutes. How many will shorten the average waiting time in a front where supermarket open another three cashiers? 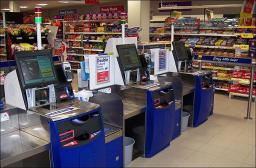