Road sign informs the gradient is 10.9%. Calculate the angle which average decreases. 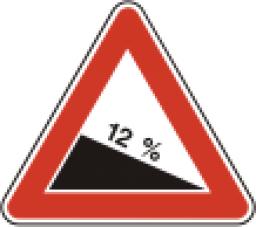