Height of the arc - formula

Calculate the height of the arc if the length of the arc is 77 and chord length 40.
Does exist a formula to solve this? 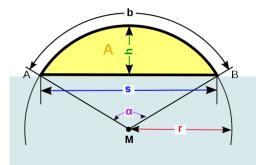