Railway line had on 5.8 km segment climb 9 permille. How many meters track ascent? 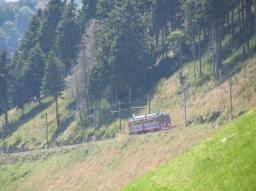