The swallow will fly 2.8 km per minute. How many km will the swallow fly in one hour? 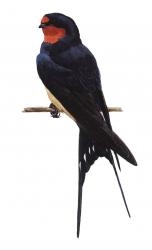