How many of the largest square sheets did the plumber cut the honeycomb from 16 dm and 96 dm? 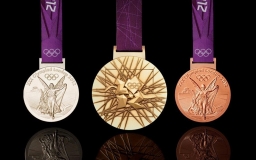