The picture shows the ABCD square, the EFGD square and the HIJD rectangle. Points J and G lie on the side CD and is true |DJ| <|DG| and the points H and E lie on the DA side, with the |DH| < |DE|. We also know that |DJ| = |GC|. The hexagon ABCGFE has a perimeter 96 cm and hexagon EFGJIH having a perimeter 60 cm and a rectangle HIJD have perimeter 28 cm. Find the area of the hexagon EFGJIH. 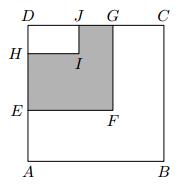