Seedcake costs 44 cents. How many minimum seedcakes we must buy that we can pay in cash only whole euros? 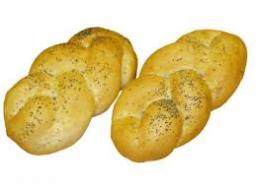