Calculate the volume of a regular hexagonal prism whose body diagonals are 24cm and 25cm long. 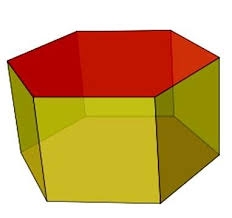