Mr. Smith have gone withdraw from bank saving interest € 1,500. How big was his initial deposit if the annual interest rate is 1.5%? 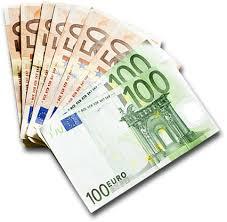