Draw angle |∠ ABC| = 130° and built its axis. What angle is between axis angle and arm of angle? 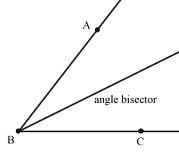