Data showed that 22% of people in a small town was infected with the COVID-19 virus. A random sample of six
residents from this town was selected. Find the probability that exactly two of these residents was infected. 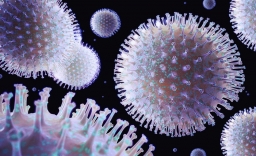