Watering can full of water weighs 10 kg. Half-full can weighs 5.5 kg. How much weigh can? 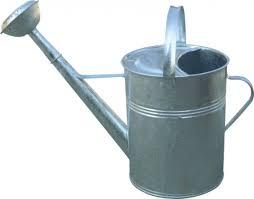