The canister is filled with oil weight 17 kg. If filled only half weight 9 kg. What weight does my empty canister have? 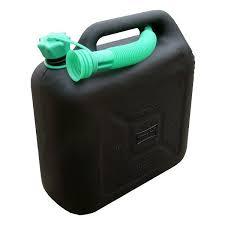