Axial section of the cone is an equilateral triangle with area 168 cm2. Calculate the volume of the cone. 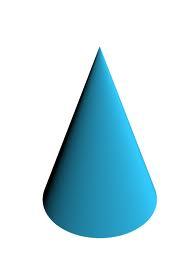