The triangle has one side long 71 m and its two internal angles is 60°. Calculate the perimeter and area of the triangle. 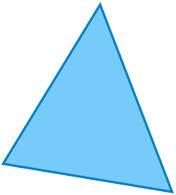