Identical rectangles ABCD and EFGH are positioned such that their sides are parallel to the same. The points I, J, K, L, M and N are the intersections of the extended sides, as shown. The area of the BNHM rectangle is 12 cm2, the rectangle MBCK area is 63 cm2 and the rectangle MLGH area is 28 cm2. Find the area of the IFJD rectangle. 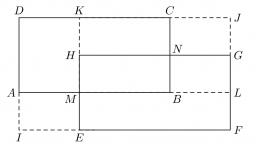