Imagine a set of students in your class (number of students: 19), who wears glasses. How much minimum and maximum element may contain this set. 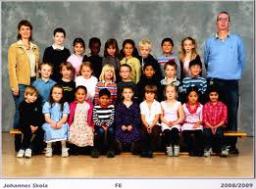