In the market we have 3 kinds of chocolates.

How many ways can we buy 14 chocolates? 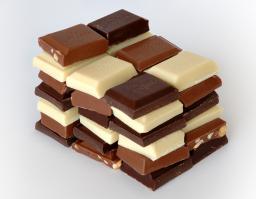