Median to side b (tb) in triangle ABC is 12 cm long.
a. What is the distance of the center of gravity T from the vertex B?
b, Find the distance between T and the side b. 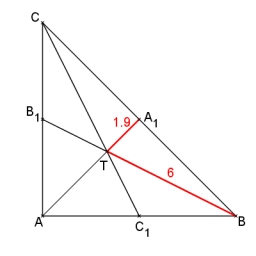 Jojo
This is a really easy and fun problem.
1 month ago  Like

I Really Like Math!!
OMG!!! This is my favorite math problem in the whole world!!!!!
1 month ago  Like