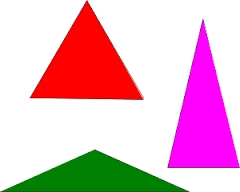 Steve
No, your solution starts with h=25cm, but the question says that h=24cm.