Number 839 divide into the two addends that the first was 17 greater than 60% of the second. 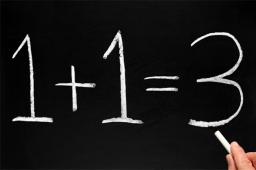