Peter has 29 toy cars, Zdenko has 8 toy cars less. How many toy cars has Zdenko? 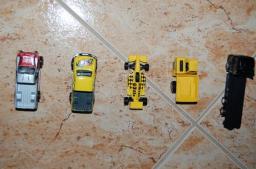