How many minimum apples are in the cart, if possible is completely divided into packages of 6, 14 and 21 apples? 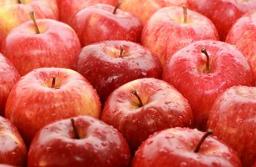