How many seedlings grandmother had to buy to have all rows again with 13 seedlings? 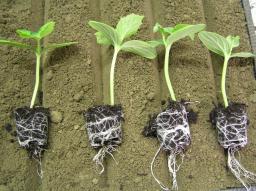