What is the size of the surface of Gymball (FIT - ball) with a diameter of 65 cm? 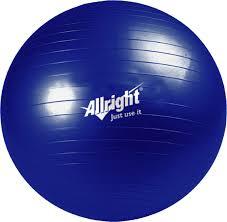