The difference of two numbers is 1375. If their exact quotient is 12. Find the two numbers 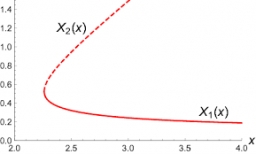