A total of 94270 holidaymakers spent part of their holiday in 50 hotels a year. On average, how many vacationers are there for one hotel? 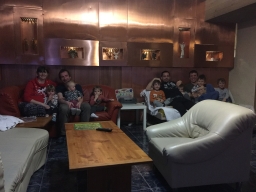