Two angles are complementary. If one angle measures 10°, what is the measure of the second angle? 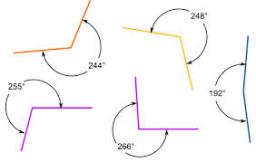