Difference between length and width of the rectangle is 8. Length is 3-times larger than the width.

Calculate the dimensions of the rectangle. 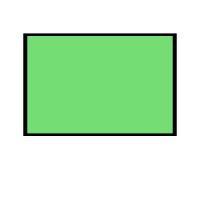