For the first week of February by influenza 5% of children in kindergarten. The second week ill 9 next children, bringing the number of patients increased to 20%. How many children went to the kindergarten? 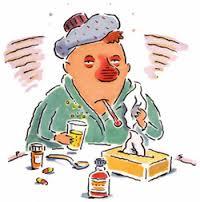