4 chess players took part in the competition. How many tournaments have taken place if every chess player has fought everyone once? 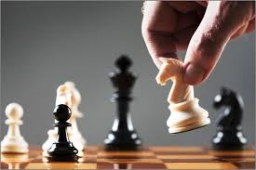