Seats in the sport hall are organized so that each subsequent row has five more seats. First has 10 seats. How many seats are: 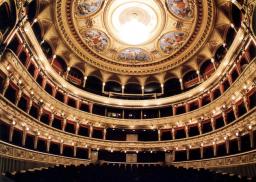