15 squids and sparrows sat on the tree. Sparrows were 8 less than squids. How many sparrows were sitting at the tree? 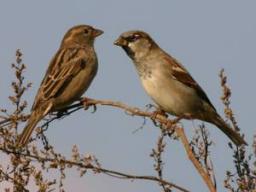