The temperature recorded in Simla is -4°C and in Kufri is -6°C on the same day which place is cooler on the day? 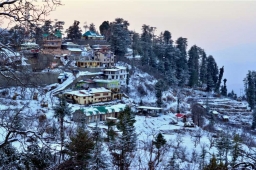