I think number. If subtract from the twelfth square the ninth square I get a number 27 times greater than the intended number. What is this unknown number? 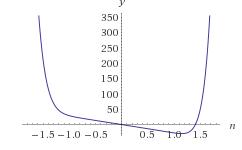