At a certain college it is estimated that 25% of the students have cars on campus. Does this seem to be a valid estimate if in random sample of 90 college students, 28 are found to have cars? Use a 0.05 level of significance. 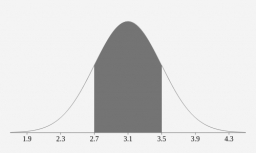 
Tips to related online calculators
Looking for a statistical calculator?
Our percentage calculator will help you quickly calculate various typical tasks with percentages.