There was a glimpse of the sky, and we hear thunder in 4.5 seconds. The light spreads at 300,000 kilometers per second so that we can assume the flash instantly without delay. However, the sound's speed is much lower in the air, one-third of a kilometer per second. How far away is the storm? 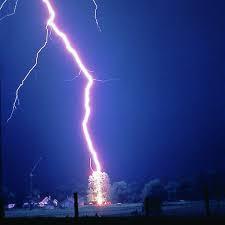