Calculate the surface of the cube, which is composed of 64 small cubes with an edge 1 cm long. 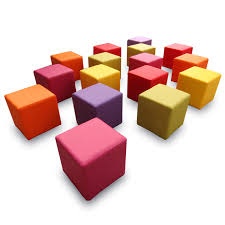