The farmer farming 293 ha of arable land and the remaining 20% are meadows and pastures. How much land farmer owns? 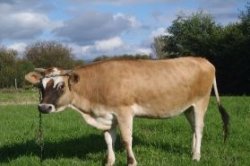