Mom is 30 years older than the daughter. What is the age difference between them in 35 years? 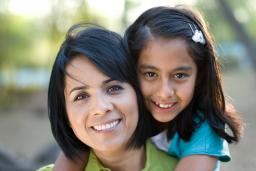