Calculate the wavelength of the tone frequency 11 kHz if the sound travels at speeds of 343 m/s. 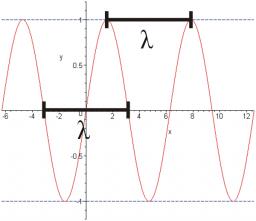