Calculate the speed of a wave if the frequency is 336 Hz and the wavelength is 10 m. 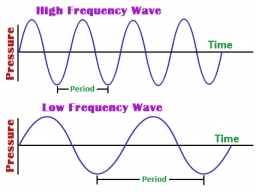