At the beginning of the year, Tomas had saved 230kc, after half a year even 590 CZK. How many crowns did he save each month when saving the same amount? 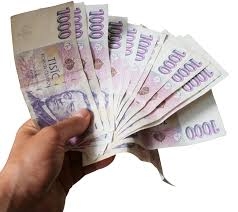