We have a virus that lives one hour. Every half hour produce two child viruses. What will be the living population of the virus after 3.5 hours? 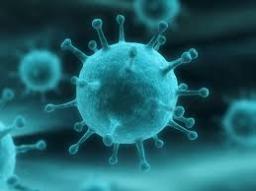