How many ways can 7 guests sit down on 8 seats standing in a row? 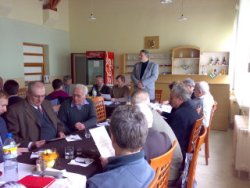